We are grateful to Pierluigi Petrobelli, president of the Learned Committee of the National Institute of Verdi Studies and “Knight of Verdi” - nominated by the Club of 27 of Parma - for kindly allowing us to publish his biography of Giuseppe Verdi.

Born at Le Roncole, near Busseto (Province of Parma), on 9 or 10 October 1813, to an innkeeper and a spinner, Verdi showed musical talent early on, as the inscription on his spinet bears witness: Cavalletti, a harpsichord-maker, repaired the instrument free of charge, “seeing the good willingness that the boy Giuseppe Verdi has for learning to play this instrument.” He owed his cultural and humanistic education mainly to his frequenting of the well-endowed library of Busseto's Jesuit School, which still exists.

Ferdinando Provesi, the local bandmaster, taught him the rudiments of musical composition and instrumental techniques, but it was in Milan that his personality was formed.

Although he was not accepted at the Milan Conservatory (because he was over the age limit), for three years he mastered counterpoint technique as a student of Vincenzo Lavigna, former maestro al cembalo at La Scala. At the same time, frequenting Milan's opera houses allowed him to become familiar, first hand, with the contemporary opera repertoire.

The Milanese atmosphere, influenced by the Austrian occupation, also permitted him to become familiar with the classical Viennese repertoire, especially the string quartet repertoire. His relationships with the aristocracy and contacts within the theater world were also decisive for the young composer's future: he would not dedicate himself to sacred music, as a church music master, or to instrumental music, but instead almost exclusively to music for the theater.

His first opera began life as Rocester (1837), had a long gestation period, and was then transformed into Oberto, Conte di San Bonifacio; it was first performed on 17 November 1839, at La Scala, and the outcome was on the whole satisfactory.

Bartolomeo Merelli, the impresario of Milan's greatest opera house, offered him a contract for two other works: Un giorno di regno (Il finto Stanislao), a comic opera, was performed only once (5 September 1840), and it was only with Nabucco, which premiered on 9 March 1842, that Verdi's talent was fully revealed.

The same model - a grandiose spectacle with a plot painted in broad strokes - was used again in his next opera, I Lombardi alla Prima Crociata(Milan, La Scala, 11 February 1843), and it was only with Ernani (Venice, La Fenice, 9 March 1844) that he focused his dramatic experience on the characters' conflicting passions. This stylistic path was followed again in I Due Foscari (Rome, Teatro Argentina, 3 November 1844) and was further refined in Alzira (Naples, Teatro San Carlo, 12 August 1845).

All of the operas dating from Verdi's first creative period differ from each other, because in each of them this or that particular aspect of the musico-dramatic experience was explored.

Thus, in Giovanna d'Arco (Milan, La Scala, 15 February 1845), based on a tragedy by Schiller, the supernatural plays a decisive role in the plot, which, once again is adapted to the grandiose style; whereas in Attila (Venice, La Fenice, 17 March 1846) Verdi experimented not only with putting the spectacular on stage but also with the overall organization of the individual acts that make up the score.

With Macbeth (Florence, Teatro alla Pergola, 14 March 1847), Verdi dealt for the first time with a Shakespearean text and, above all, emphasized the dramatically important connections among the plot's critical moments. This he did by exclusively musical means.

By the age of 34, the composer had achieved international fame; his operas were frequently performed at opera houses all over the world and were commissioned by the major Italian theaters. A typical case was the premiere of Il Corsaro (Trieste, Teatro Grande, 25 October 1848), which the composer could not attend because he had to be elsewhere.

But this wasn't enough for Verdi. The transformation of I Lombardi into Jérusalem (Paris, Opéra, 26 November 1847) was the result of his first encounter with the demands - but also with the imposing means that were available - of French grand opéra, and traces of that experience are obvious in La Battaglia di Legnano (Rome, Teatro Argentina, 27 January 1849), in which personal conflicts alternate with political aspirations (elicited by the explosion, at that time, of agitation for Italian reunification). In Luisa Miller (Naples, San Carlo, 8 December 1849), again based on a Schiller text, the conflicts shift: they are now between different social classes, and innocence is the loser.

In Stiffelio (Trieste, Teatro Grande, 16 November 1850), the bourgeois atmosphere of a religious sect brings to light the conflict between personal feelings and the duties imposed by a spiritual burden. In Rigoletto (Venice, La Fenice, 11 March 1851), Verdi's art reaches one of its highest points, thanks to the perfect dramatic connections (the result, in part, of faithfulness to Victor Hugo's original story), which were realized with an equally perfect balancing of musical means: the court jester's revenge for the outrage inflicted on his daughter by the libertine duke rebounds horribly against himself, while nature is unleashed in a storm. La Traviata (Venice, La Fenice, 6 March 1853) also deals with the private dimension - the score centers on the heroine, a courtesan whose complete self-sacrifice is set in opposition to the hypocritical conventions of society.

Counterbalanced against these two plots, in which the story's development unfolds at a highly intense pace, there is the plot of Il Trovatore (Rome, Teatro Apollo, 19 January 1853), based on Garcà­a Gutiérrez's play of the same name, in which the motives behind the action are continually being evaded; the drama's action is constantly sublimated in the musical gesture, thereby realizing a sort of pure theatricality that was not patterned on anything that came before it and could not be compared to anything else.

Verdi returned to grand opéra in Les Vêpres Siciliennes (Paris, Opéra, 13 June 1855), in which he confronted for the first time the exigencies of French recitation and once again made use of conflicts between individuals with their aspirations and the feelings of an entire people.

In addition to the translation of Il Trovatore as Le Trouvère, and the transformation of Stiffelio into the inferior Aroldo (owing above all to the censors' requirements), in Simon Boccanegra (Venice, La Fenice, 12 March 1857) Verdi experimented in new ways with the theme of political conflict, whereas in Un Ballo in Maschera (Rome, Teatro Apollo, 17 February 1859) the conflicts take place primarily within each of the main characters; they are represented by an ongoing play of symmetries among situations and disguises that correspond to the continual variations of the rhythmic cell on which the whole score is based. An analogous structural experimentation can be found in La Forza del Destino (St. Petersburg, Imperial Theater, 10 November 1862), in which, once again, the unlikely vicissitudes and sufferings of the individual characters stand out against the indifference displayed in the massed scenes.

Drawn back into the French orbit, Verdi revised Macbeth (Paris, Théâtre Lyrique, 21 April 1865) and composed Don Carlos (Paris, Opéra, 11 March 1867), in which the requirements of a grand spectacle were bent to meet the needs of the most complex of all of Verdi's dramatic creations: the conflicts within and between individuals are bound together in a vertiginous spiral, in which the liberal political ideas of the Marquis of Posa are contrasted with the absolutism of King Philip II; and over both of them, the power of the Church, embodied by the Grand Inquisitor, prevails.

Verdi, who had been elected to the first Italian Parliament, and who, at Cavour's request, had composed the Hymn of the Nations for the opening of London's World Exposition of 1862, noted, with growing concern, the absence of a feeling of belonging to the newborn nation, and he never ceased to point out models in which a common cultural legacy could be recognized. Upon the death of Rossini (13 November 1868), he suggested creating a requiem mass as a collective homage by Italian composers to the greatest exponent of their art (1869); and, in revising La Forza del Destino, he wrote an overture in a form based on that of Rossini's William Tell Overture.

The composition of Aida (Cairo, Opera House, 24 December 1871), commissioned by Ismail Pasha as a “national” Egyptian opera, led to a highly original, Italian-style interpretation of the spectacular and dramatic requirements of grand opéra; here the conflict is again between political power and the individual, and it leads to the annihilation of the latter via a kaleidoscopic alternation of stylistic, musical, and theatrical experiences.

Seeing the spread, in Italy, of instrumental music from beyond the Alps, Verdi reacted by composing a string quartet (Naples, 1 April 1873) to demonstrate that he was able to fight the “enemy” on his own ground. And on the death of Alessandro Manzoni, Verdi decided to compose a requiem, building on what he had already written as the last movement of the collective Mass for Rossini; the new work maintained the old one's textual articulation and its alternation of sound textures.

But the Requiem - another political message, which identified in its dedicatee Italy's greatest contemporary literary glory and, in Palestrina, the historic model on which some of the score's crucial s are based - is a solitary, totally subjective meditation on the mystery of death, with constantly frustrated strivings toward a transcendence that is made to feel improbable.

A rather prolonged period of apparent stasis and creative inactivity was followed by a radical revision of Simon Boccanegra (1880-81) - which, among other things, marked the beginning of Verdi's collaboration with Arrigo Boito - and the transformation of Don Carlos from a grand opéra in five acts into an Italian opera in four (Milan, La Scala, 10 January 1884).

With the composition of Otello (Milan, 5 February 1887), Verdi brought drama back to the level of the individual - the protagonist - who struggles between the abstractions of absolute good (Desdemona) and absolute evil (Iago). Within the continuing flow of the musical and dramatic material, Otello still contains recognizable static nuclei in which one can distinguish the musical set-pieces of the past, but in Falstaff (Milan, La Scala, 9 February 1893), Verdi's final opera, action is transformed into pure mental play, which corresponds to an equally subtle, refined procedure of symmetries in sound.

Verdi's artistic parabola came to end with the composition of three sacred pieces - a Stabat Mater and a Te Deum for chorus and large orchestra, framing the prayer to the Virgin from the last Canto of the Divine Comedy, for four solo women's voices; to these three pieces Verdi later added, at the beginning, a previously composed Ave Maria for a cappella chorus. Here, as in the Requiem, the strivings for transcendence alternate with a pessimistic vision of human reality - the only one in which Verdi truly believed. And for elderly musicians, Verdi created, in Milan, a Rest Home that he described as “my greatest work.”

Verdi's death, on 27 January 1901, marked the end of an era in Italian life; the apotheosis of his funeral, however, coincided with the beginning of the improving fortunes of his works, which have never been as alive and as relevant as they are today on the stages of the entire world. 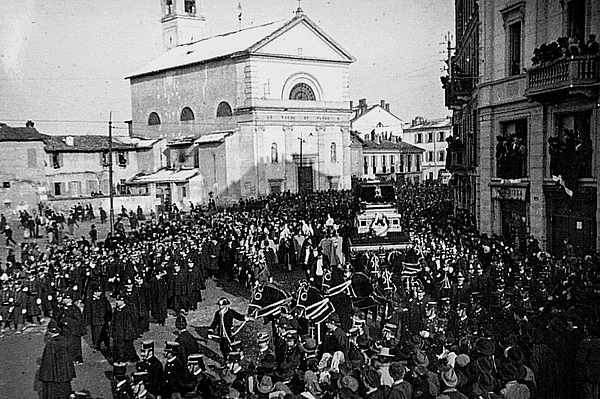